I was going to do a post titled “Meet the chickens and guineas” cause that’s what we got this week, but then I realized I should introduce the rabbits first.  We have been raising rabbits for meat for almost a year now.  It sounds crazy to a lot of people, I know.  Rabbits are cute, they are pets, and who eats rabbit anyway?  Why meat rabbits… lots of reasons, but here they are:

So we’ve been raising meat rabbits on a small scale for almost a year.  It’s not been our only meat source by any means, but it was a good start to growing our own meat which we are planning to do a lot more of here.

Temporary rabbit housing – the barn needs some work before we can move them in. 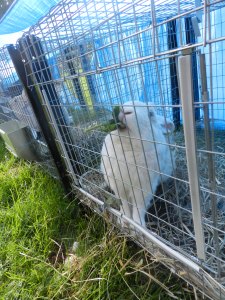 2 thoughts on ““Meat” the Rabbits”