We have had quite the recent population explosion of animals on our farm.  At the end of March our chicks arrived.  We have 26 Rainbow Ranger chicks to raise for meat and another 22 laying breed chicks.  This is the first time we have gotten laying breed chicks and I adore them.  They are so different from the meat breed chicks.  They are about the same size starting out, but eat much less, grow much more slowly, and actually act like chickens.  The meat breed chicks do nothing but eat desperately, make a mess, and grow.  They are truly disgusting little brutes.  I am glad now that I did not order the commercial Cornish Cross “frankenchickens” because I can’t imagine dealing with a breed even faster-growing than these guys.  In fact, every time I go out to feed them (3-4 times per day) they are so desperate for food they will fly into the roof of the brooder before I’ve even gotten there.  Then they stampede – jumping all over my arm as I put the food in, shoving and trampling each other, and devouring the food like hyenas who haven’t eaten in days.  Now that I have seen how the meat breed chicks compare to regular chicks, I don’t want to raise any more of them.  I feel so bad for them that they are constantly hungry.  I have a high metabolism myself so I get it!  I’m currently researching heritage meat breeds as well as considering keeping both Chanteclers and Orpingtons as dual-purpose breeds for both meat and eggs.

The laying breed chicks are happy to have their food, but not desperate.  They like to nibble grass, peck around for grit, nap, and socialize.  It’s also been fun trying to figure out what breeds we have.  We ordered a 16-pullet assortment, plus 1 Exchequer Leghorn, 2 Speckled Sussex, and 2 Buff Chanteclers.  I also purchased 3 Lavender Orpingtons and 2 Wheaten Ameraucanas locally.  Of the 15 mystery chicks, one was dead on arrival and we lost 2 the first day while we were having trouble with the brooder heating up too much.  There were several different colors in the bunch, but other than that they all looked similar.  It was easy to see that 3 of them are Polish chickens due to the crests on their heads that were already forming.  There were also 2 that had feathered legs so that narrowed down their possibilities to just a few breeds.  But for the rest of them, even with the different colors there were 5 or more possibilities of breeds they could be.  In this photo the polish chicks are the in the bottom center – one dark and two yellow, all three with puffs on their heads.

Here’s what the polish chicks look like at almost 6 weeks old and almost fully feathered: 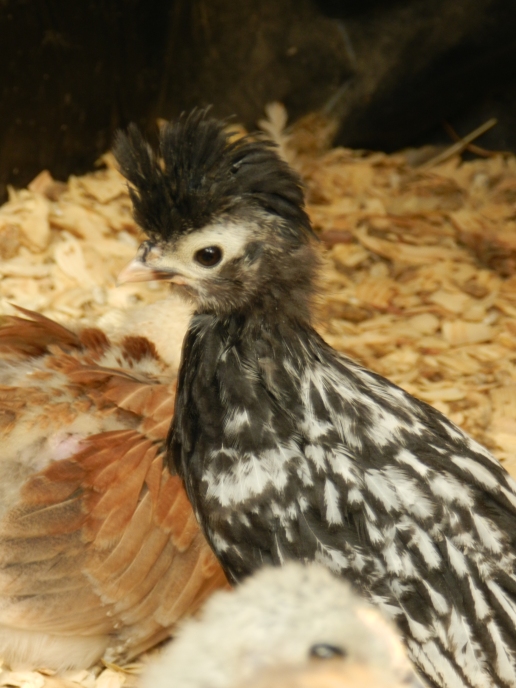 We will be choosing about 8 of the laying breed chicks to keep and selling the rest locally.  The ones we mail-ordered are all pullets other than 2 Chantecler cockerels.  The locally purchased Ameraucanas and Lavender Orpingtons are straight-run (unsexed) so they could be either.  I am hoping to end up with one cockerel of each of those breeds.  Our Lavender roo was killed in the Fall so we need a replacement and unfortunately our Ameraucana roo “Fluffy” has turned evil so we will be putting him in a pot for dinner soon.

Several others including a Lavender Orpington (far left), Light Brahma (just in front of the Orp), and Exchequer Leghorn (black and white): 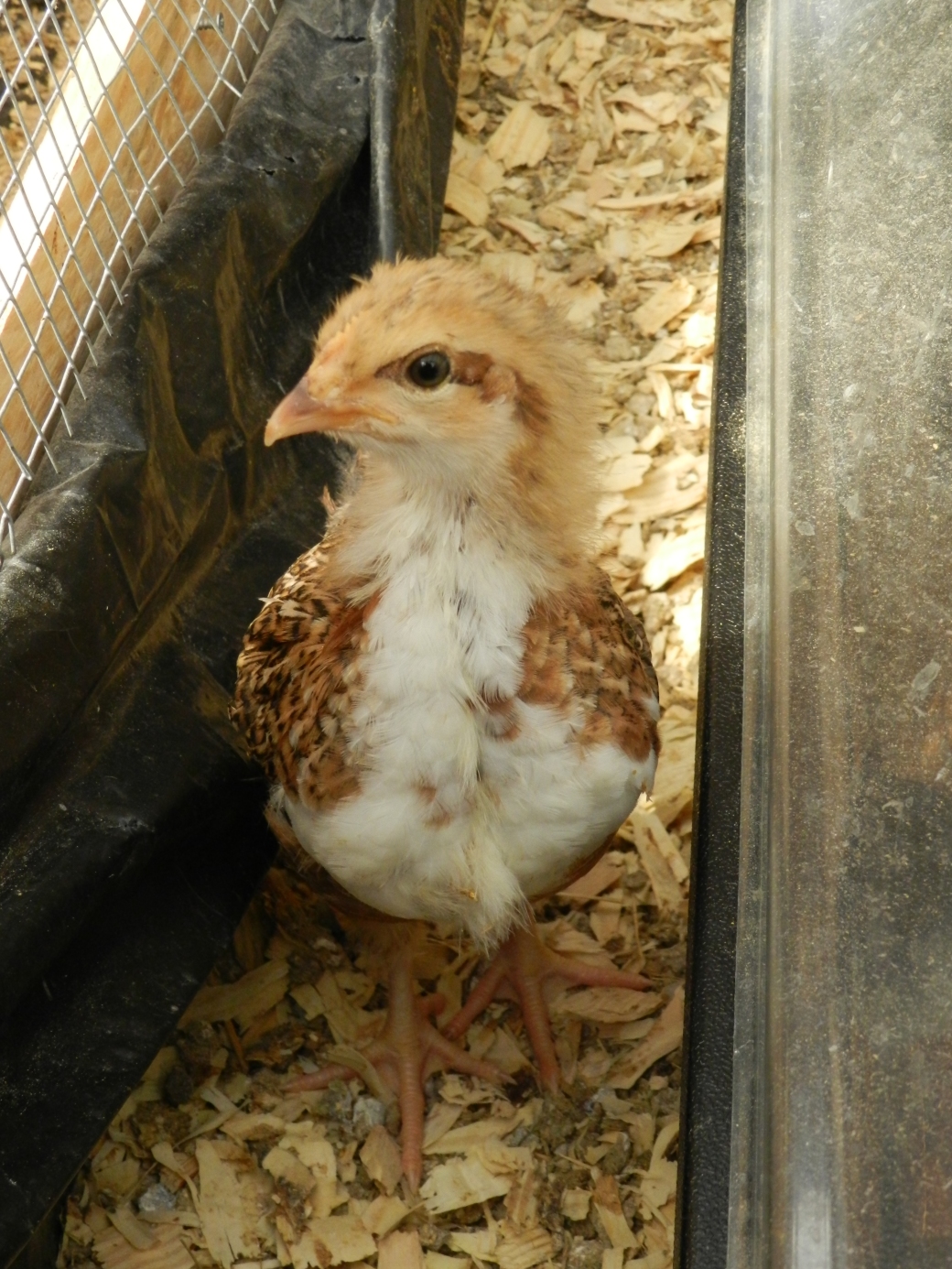 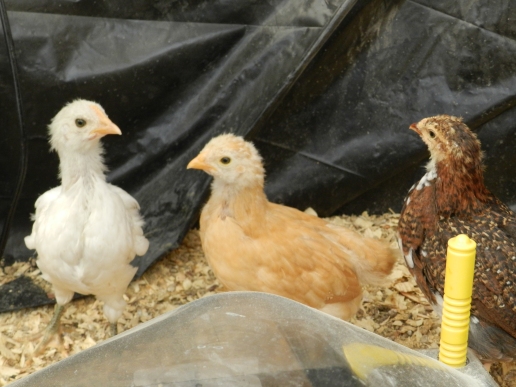 In addition to the chicks, we have had the arrival of several new litters of bunnies.  Our few meat rabbit babies that escaped the rat fiasco are now 2 months old and enjoying their time in the grow-out pen.

There are THREE more litters just about ready to go to new homes – one litter of dwarf mix, one litter of Lionhead mix, and our first litter of English Angoras!  The Angoras are so stinking cute!!!  Also we are excited to be surprised with 4 BLUE-EYED-WHITES!!! 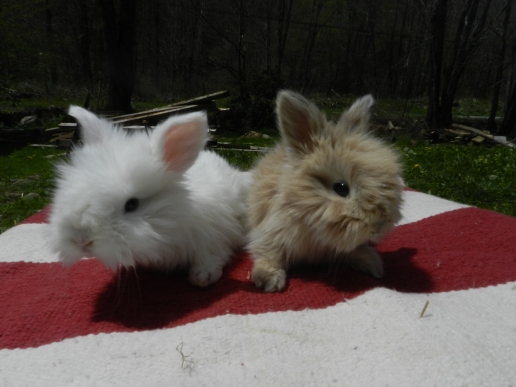 There’s another THREE litters of meat breed bunnies as well – one that’s about 2 weeks old and another 2 litters born yesterday.  That’s 7 litters total, which is way more than we’ve ever had at a time.  We only had 3 total litters this Fall and Winter combined so this is a LOT of bunnies!  The Angoras and pet bunnies will be sold soon and the meat breed bunnies will all eventually be eaten.  I plan to space out the next few litters a little better.

Another new addition to the farm is a Guinea male, Christophe.  Ana is so happy to have a new mate.  She left the chickens in the dust to free-range with Christophe and now that she has started laying I am hoping she will expand the flock.  (I think TS secretly hopes they will get lost together and not come back.  He does not share my love of guineas.)

And finally, the yet-to-hatch additions:  9 Muscovy duck eggs, 18 Porcelain Silkie Chicken eggs, and another 14 eggs from our own chickens.  They have about 2 more weeks in the incubator.  This is our first hatch so I am pretty anxious about it.  There’s always a chance that the temp or humidity is off and none of them hatch.  If we can get at least a few of the Muscovy and Silkie eggs to hatch successfully I will be happy.

Hopefully I’ll be back in about 2 weeks with a happy update!

One thought on “Spring is for Babies”