We have been here 2.5 years now which is sometimes hard to believe.  We have learned so much and accomplished so much here on the farm.  I tend to look around and see this place as a collection of unfinished projects, but we really have gotten a lot done!  One of the more difficult things I set out to do here was make some friends.  As an introvert who’d usually prefer to be farm stuff at home than anything else, making friends doesn’t necessarily come easy.  I knew we’d find lots of homestead-types in the Asheville area, plus my life-long friend LD (who I have known since we were 4) lives there and knows tons of awesome people.  In every direction on the outskirts of Asheville there are many folks like us trying to grow their farms, whether for self-sufficiency, disaster-prepping, or just trying to make a simple living.  Leicester, Hot Springs, and Marshall are hot spots for homesteaders and I am thankful for a local mama who added me to a Facebook group for Madison County homesteaders.  Yes, Facebook.  I am still shocked by how much I use it nowadays.  Facebook happened after I was out of college (or maybe as I was finishing) and it took me several more years to join.  I only sporadically used it while living in Alabama and often would shut down my account for months at a time.  Nowadays it is one of my main tools of contact with the outside world.

So anyhow, a new friend added me to a local Homesteaders Facebook group based in Madison County (which adjoins our county).  From there I made in-person connections with lots of people, mostly while buying/selling/trading chickens or rabbits.  Most of them lived in or near Marshall or Hot Springs, which was “close” in the internet sense, but still 45 minutes to an hour or more away – not close enough to call for help moving a chicken coop in a pinch, or to grab some eggs from for breakfast the next day.  After meeting a fantastic homesteading family only a few miles away and hearing from a couple that had just moved to our mountain here in Burnsville, I decided Burnsville needed its own homesteading group.  It was a no-brainer, really.  It only takes about 5-10 minutes to create a Facebook group.  I posted the link in the Madison County group with the note that I was trying to help those of us in and around Burnsville to find each other.

The group grew to about 100 members fairly quickly.  I wasn’t surprised, since Facebook groups tend to do that – the Madison group has well over 1,000 members.  But I wasn’t trying to create just a Facebook group.  I wanted to find friends and build a community.  We hosted a potluck at our farm and then the couple who had recently moved to our mountain hosted another.  Then another couple did the same and it wasn’t long after that that I could see the real friendships forming.  Not just for TS and myself, but among the other group members too.  I am so happy with how we all together are really building our community.  In the past few months, we’ve had a Ladies’ Night, a Seed-Swap, and one day several of the guys got together to help another member move a goat shed.  We are having a great time and I know help is not far away if we need it.

I do struggle a bit with how to manage the Facebook group itself.  We have a few more than 100 members now with more requests coming in frequently.  The core of the group is somewhere around 30-ish members who attend the in-person get-togethers, but we also have many of those remaining members that are very active in the Facebook group, even though I have never met them in person.  I don’t want the group to grow so large that it no longer feels like the small community that it does now, but at the same time I don’t want to exclude anyone who wants to be a part of it.  I feel a large sense of responsibility for the group since I am the creator and moderator, but I don’t consider myself to be the “president” or anything like that.  I am starting to see the Facebook group as mostly just the method of contact, since the friendships are in-person now, not just online.

The group has had many get-togethers over the past year+ and we have shared a lot of great food and conversation.  We have shared some holiday meals and homesteading advice.  We just congratulated a couple of our members who moved here together and recently got hitched in our town square and another couple who just had their first goatlings born at their farm.  A couple of us have joined forces in writing letters and attending meetings to try to keep our childrens’ school open one more year (a story for another day).  Our kids have friends in the group as well, including HS’s best friend from school whose family moved here only a few months ago.  I really can’t say enough about how happy I am with this community that we are building together and so grateful for each member who is making that happen. 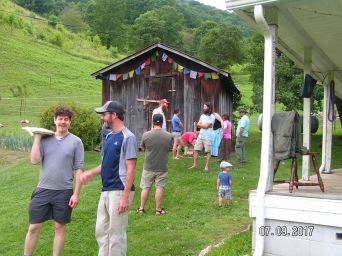 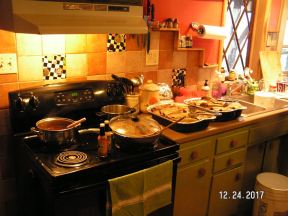 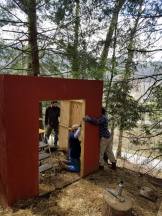 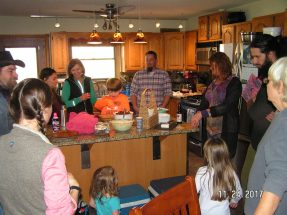